Another excellent and well attended presentation by Greg Canty of Fuzion Communications was held at the Ludgate Hub on 11th Feb, co-hosted by the Skibbereen Chamber of Commerce.  Greg demonstrated the value of social media in business promotion, and made the point that social media can only work if our clients actually engage with what we put out there.   And to do that our content needs to be intersting and relevant to them.  The experience of political parties at recent elections across the globe is a case in point.

Recounting a public talk by Fianna Fáil leader Micheál Martin, Greg Canty heard an audience member asked Mr Martin how his party were planning to match the astonishing success of Sinn Fein on social media.   Three weeks before the election SF had four times the following on Facebook and twitter than rivals FF.  As Greg noted, while there were many reasons for the subsequent election result,  FF’s underestimation of the power of social media was a factor.

In the British election last December, Jeremy Corbyn’s Labour party was dominant when it came to campaigning on the internet, making use of memes, viral Facebook posts, and sharply edited videos to catch the eye of voters.  As the party website said before polling day “On Facebook Jeremy Corbyn and Labour achieved 86.2 million views on campaign videos, compared with only 24.5 million views for Boris Johnson and the Conservatives”.  Ian Lavery, Labour Party Chair, added “with a Tory dominated media, the ability to get our message out on social media has been a game-changer and we’ve been able to reach tens of millions.”

The result at the polls did not reflect this.  Riding high on social media did not result in a landslide akin to that enjoyed by Sinn Fein in Ireland.  So what made the difference?  One factor was that despite the volume of social media posted by Labour the public’s engagement with Tory posts was often more enthusiastic.

As Alex Hern, UK technology expert at the Guardian wrote

“The internet wasn’t the place for smart campaigning. The Labour party put out slick video after slick video .. while the Conservatives simply sat down and spent six weeks being wilfully stupid, and it worked”.

Echoing this Full Fact found that

“88% of Conservative advertisements published on Facebook over a four-day period contained claims deemed to be misleading by Full Fact, a fact-checking organisation used by Facebook itself (the figure for Labour material was 7%)”.

So the correctness of the message was not the issue.  It was its resonance with the public that mattered. Quoting The New York Times John Harris puts it like this.  “We are, it seems, in the opening stages of a completely new age, in which victory will usually go, as the New York Times put it the other day, to those who specialise in “emotionally charged, hyper-partisan content, regardless of its factual accuracy”.

In the USA the 2016 election was another major social media battleground for the two candidates- Hillary Clinton and Donald Trump.  Social media had played a large part in the success of Barack Obama in 2008, so both camps expended massive time and funds on Facebook ads this time around.  While the result was close, Trump came out ahead on social media and in the polls.  Why?  The way that the medium was used was a clear factor.

Recognising a growing market for their services Facebook offered both parties coaching and support to make the most of Facebook as a campaigning tool. The Republicans accepted and took whatever advice they could get.  The Democrats declined the offer saying that they had it taped.  Clearly they didn’t. Not surprisingly the Trump campaing’s expenditure on Facebook this time round will be even greater.  His online campaign manager Brad Parscale told the Guardian “The campaign is all about data collection.  If we touch you digitally, we want to know who you are and how you think and get you into our databases so that we can model off it and relearn and understand what’s happening.”

Handled well the rewards of using social media are clear. Hubspot record that

“Social media helps us communicate our brand and engage with our audience. There’s a real and powerful emotional connection that our brand shares with fans and consumers. When we showcase that relationship, it’s a home run for us. And there’s no better way to authentically communicate our brand message than engaging with people naturally through social media.”

So many thanks to Greg for a great talk, and some excellent tips on how, when and what to post on social media to keep our services and products in the public eye. 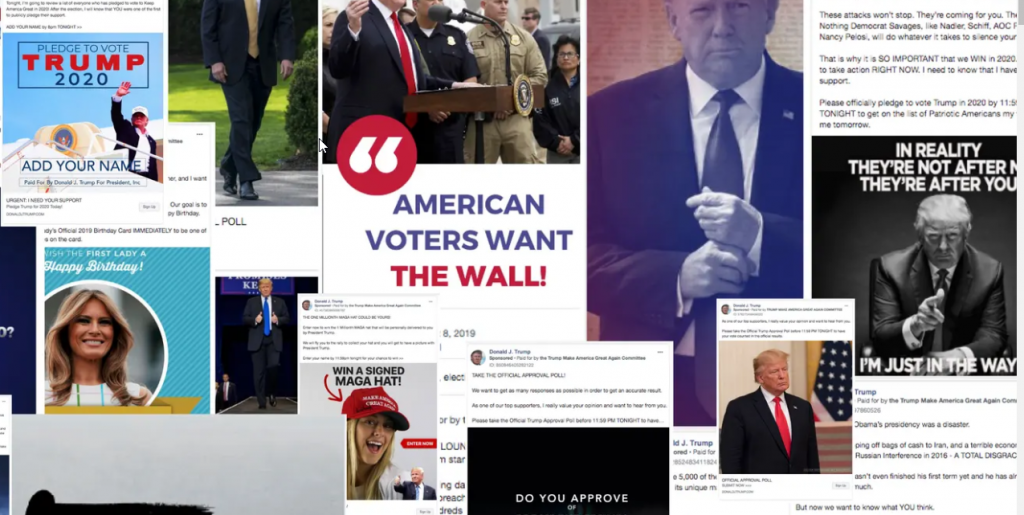