“We’ve all heard that a million monkeys banging on a million typewriters will eventually reproduce the entire works of Shakespeare. Now, thanks to the Internet, we know this is not true.” Robert Wilensky

Why use social media?  Because so many other people already do. Social media, including twitter, Facebook, linkedin and stumbleupon are becoming more common, and more commonly used across the developed world.  What are they?

They have been here less than five years, but already in 2010 Facebook announced that they had reached over 400 million worldwide users and Twitter reached the benchmark of 50 million tweets per day.  Facebook and Twitter had triple-digit growth in 2009 and social networking accounted for 11% of all time spent online. 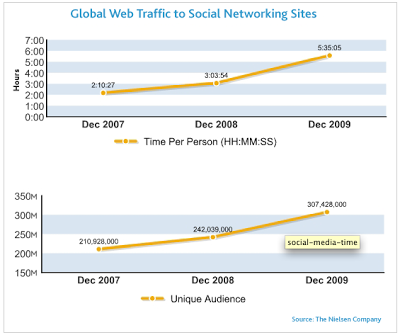 In 2011 it is estimated that 92% of online adults are using social media. So who are they? Google have analysed who is using which site and in what numbers, and Ethan Block of Flowtown has kindly set it out in a graph.  It makes for an interesting read.  Here are digg, stumbleupon, reddit, facebook, linkedin, twitter, myspace and ning (the key to each logo is above).  Each tiny square represents 1% of users, so the charts give a good visual representation of how a demographic group uses each social media.  They are analysed for user age, gender, educational background and income.

Age profile
Looking at the spread of users by age, few over 55’s use any social media, and even fewer over 65’s.  But surprisingly, perhaps, the greatest users of all social media are the 25-54 year olds – the middle aged crowd.  The stereotype of the texting, facebooking teenager is only true for Myspace. Even facebook has migrated from a college mating and dating site to the key social media tool of the middle years, as has twitter.

Education
﻿﻿Next up is educational background. Again, it is the university degree educated people who are using social media most, with linkedin unsurprisingly pulling in the most given its very career and cv dominated profile.  Those with Phd’s might seem to be using social media less, but there are presumably far fewer of them in the world so a high proprotion of them must be using these media to rank in the numbers they do.
﻿﻿

Income
﻿﻿The next chart shows income level.  Linkedin shows that it attracts those who aspire to earn a lot rather than those who actually do.  The well off seem to be just as busy using facebook to chat and watching videos on digg, although the very high earners clearly have less need or desire to communicate with the rest, featuring very little at the top end of the chart.  But really, with the exception of Myspace, the spread is again very even and shows that social media is not the preserve of any particular group in society.
﻿﻿
﻿﻿

Gender
﻿Lastly, is social media use a gender specific activity?  To an extent yes.  There are certainly more women than men represented in most categories, and especially in twitter and myspace.  The exception is digg which is more of a male preserve, but only just.  Overall the numbers support the idea that both genders use every type of social media in large numbers.
﻿
﻿

So, the simple answer is, pretty well every social group you can think of is using social media.  If you want to get your website noticed and linked to, so should you.